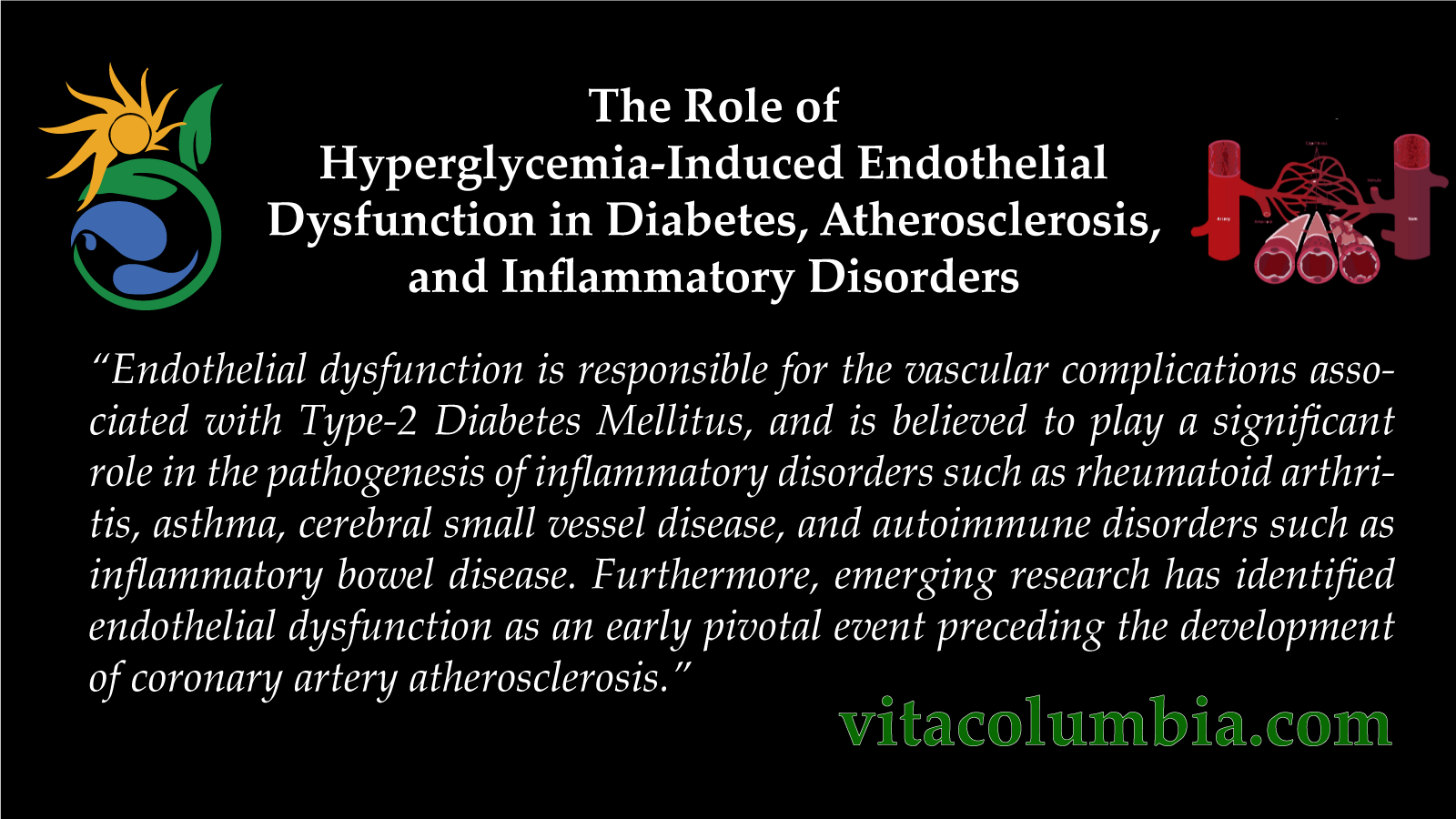 The Role of Hyperglycemia-Induced Endothelial Dysfunction in Diabetes, Atherosclerosis and Inflammatory Disorders

The prevalence of type 2 diabetes mellitus (T2DM) has tripled in the past three decades, with 2014 figures estimating 422 million diabetics worldwide. Additionally, half of those with diabetes are currently undiagnosed. Hyperglycemia is the primary feature of T2DM, and is most often caused by metabolic abnormalities. Pre-diabetes precedes the onset of T2DM by several years and encompasses early metabolic changes called impaired fasting glucose. Vascular complications in T2DM increase in proportion to the duration of hyperglycemia. Chronic hyperglycemia triggers endothelial dysfunction, the primary factor in the pathogenesis of diabetic vascular complications. Furthermore, emerging research has identified hyperglycemia induced endothelial disfunction to play a significant role in the pathogenesis of atherosclerosis and other inflammatory disorders.

Endothelial cells (ECs) line the internal surface of all blood vessels, and serve as a barrier between circulating blood and tissues. ECs are crucial in the regulation of vascular tone and maintenance of vascular homeostasis. Under normal physiological conditions, ECs exist in a dormant state, but under various mechanical and chemical stimuli, ECs synthesize and secrete many vasoactive substances and growth modulators. ECs are particularly sensitive to changes in blood glucose levels, and hyperglycemic conditions induce acute endothelial inflammation, and a prolonged pro-inflammatory state leading to endothelial dysfunction.

Endothelial dysfunction is characterized by a loss of balance between vasoconstrictors and vasodilators, growth promoting and inhibiting factors, pro-atherogenic and anti-atherogenic factors, and pro-coagulant and anti-coagulant factors. This disruption in vascular homeostasis is caused by reduced nitric oxide production, increased endothelial permeability, increased expression of adhesion molecules, and increased apoptosis. Endothelial dysfunction is responsible for the vascular complications associated with T2DM, and is believed to play a significant role in the pathogenesis of inflammatory disorders such as rheumatoid arthritis, asthma, cerebral small vessel disease, and autoimmune disorders such as inflammatory bowel disease. Furthermore, emerging research has identified endothelial dysfunction as an early pivotal event preceding the development of coronary artery atherosclerosis.

Researchers hypothesize the risk of developing autoimmune diseases, diabetes, and atherosclerotic coronary artery disease to be directly related to the number, intensity and duration of hyperglycemic events. The modern diet is rampant with refined sugar products and beverages with high-fructose corn syrup which cause massive spikes in blood glucose levels. A simple dietary modification to reduce hyperglycemic episodes and associated endothelial dysfunction is to supplement sugar with low-glycemic alternatives such as vitaSWEET, an all-natural sugar alternative, that is as sweet as sugar, bakes like sugar, but without the metabolic consequences.